One of the most important features of a book.

It identifies your work, and sometimes it also gives an impression of the story beneath the cover.

It is also helpful when that title is unique 😀 And due to this fact I have had to re-name one of my books.

Now, I have read up on the law regarding using the same title, and it does say you can use it as long as you don’t have the same story. Which makes sense.

But, I just felt kind of bad about using the same title as someone else. It was hard to change the title though, I have to admit. It was a difficult moment. Not only because it was hard thinking of something new, but also because the book title I changed was Stolen.

Stolen was a story I wrote when I was 15, and it has remained Stolen all these years, running around in my head knowing I would want to re-write it one day. So yeah, it’s been Stolen for quite some time and it feels weird calling it something else.

I also changed the title of another book, though that wasn’t so difficult. My third manuscript title was originally Victor!, but something didn’t feel right about it. Even though it suited the story, it just felt wrong.

But the other day, a title popped into my head. I mean, quite literally! 😀 I was just sat there and BAM!

Heart of the Arena.

So, it’s been a pretty interesting week with titles 😀 Two changed and for different reasons, but it was important to change them and get it just right. Titles are part of the catch to draw a reader’s attention, after all, so they have got to be perfect.

Also, in part celebration of the progress I’m making, and the fact I’m just totally excited. I present to you, Stolen’s new title, cover and blurb!! 😀 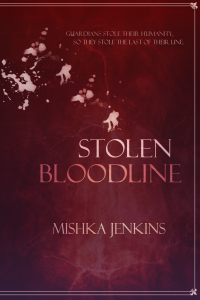 Blurb:
Stolen away from her humdrum life, Imogen is thrown into a dark world where the creatures from tales are not only real, but rule the realm.

In this world of dark, moonlight is Imogen’s only source of safety, but the moon’s glow reveals a lot more than she ever realised. She soon learns her heritage and bloodline are what put her in danger, and the reason these vampires are keeping her hostage. But with a father who doesn’t even care enough to call, how was she supposed to know?

Held captive by the vampire leader, Bane, and his brother, Caden, Imogen must find a way to keep herself alive. Yet, the longer she remains, the more she wonders whether those she feared are the ones she should trust, as new truths continue to shine through.

When Bane shows Imogen that life in a world of dark can be more enlightening than her own sunlit realm, it seems that, though he may have stolen her from home, she risks him stealing her heart as well.

*Blurb edited and improved by the incredible suggestions of Amos M. Carpenter

“But what if I want to know?” Imogen asked whilst standing from her place. “Haven’t I earned that much by being kept prisoner here?” Her voice was as firm as his had been. She had not meant to say it, she had not wanted to ruin that night by reminding them both of the situation. Yet his reluctance and unwillingness to trust her had for some reason hurt deep within her.

Bane stiffened at her words and then the expressionless, stern façade he had lost long ago when talking with her returned. Imogen bit her lip and clenched her fists.

“As you say,” he said, his calm demeanour returned. “You are a hostage, and that is all you are.” It was as though he’d just once again realised she wasn’t a guest but his prisoner.

“And you are the man, the monster, keeping me in this dark prison!” Imogen didn’t know what she was saying, it was just blurting from her in angry shouts before she could stop herself.

“Monster?” Bane swallowed hard, her use of the word obviously cutting at him. Imogen wanted to apologise, but her stubbornness made her throat seize up. “Do not think yourself so precious, my lady.” His formality sent a shooting pain across her chest. “It was your bloodline that made me so monstrous.”

“People I don’t even know did that, not me.”

“But you see me as only someone who would cause harm?” Bane asked. Imogen gasped and stumbled back against the wall when he lunged forwards, his hands slamming against the stone either side of her. The force put dents in the wall where his fists collided. “You think I would hurt you? After everything, you still believe-” He stopped himself. Their breaths mingled at the closeness of his face to hers. Imogen felt the barrage of unspoken declarations that passed between them like electric over her skin, Bane seeming to sense it also, his jaw clenching. Imogen knew their anger stemmed from them both trying to deny what they felt, what they knew was happening. Yet still she remained silent, unwilling to admit the emotions she knew she should not feel so strongly for him, even if saying them would free her from the constant pressure of burying them. Bane let out a low growl before storming out of the room.

Hope you enjoyed it!

Have you had trouble with titles? Have you had to change titles of your books? Do they come to you easily, or do you have to work to come up with a title? What’s your favourite title (your’s or someone else’s)?